Simple Decor and Organization for a Teeny Tiny Vanity

I’ve been in the mood to organize my teeny tiny vanity for a long time now. Well, I finally got around to tackling it.

I keep my vanity in our bedroom. It’s a miracle I can even have a vanity of any size in there. Our bedroom already has so much furniture since we are sharing the room with our daughter. But we’ve managed to make it work pretty well.

I have always kept my vanity somewhat organized but lately, it’s been looking a bit cluttered and not so organized.

I had way too many exposed items that were constantly getting dusty. My hair brushes and a few hair appliances were kept outside (on the floor in an old metal bin) and there were other small items scattered on top and under the vanity.

I did have a designated space for everything which was nice but, the area needed some improvements.

So I started by setting some goals to guide me before I got to the organizing part:

Goal #1: Remove as many exposed items (especially the smaller items) as possible and store them preferably in drawers where they were away from the annoying dust bunnies. (Sorry dust bunnies, but word on the street is that you are made of lint, hair and yucky dried up skin cells! So no, you are not the cute kind of bunnies like the ones that hang out in my daughter’s crib)

Goal #2: Remove as much as I can off of the floor.

Ok, let’s go back in time for a moment with the help of my handy dandy camera so we can take a look at what the vanity looked like before I started organizing.

I had some of my makeup stored in two acrylic organizers that are stacked together, a coaster (off to the left), my makeup brushes, a ginormous bottle of gel, a box of tissues, some concealer, setting spray and moisturizer that I wasn’t even using, and lastly some Q-tips, bobby pins and hair ties in those small clear containers off to the right. 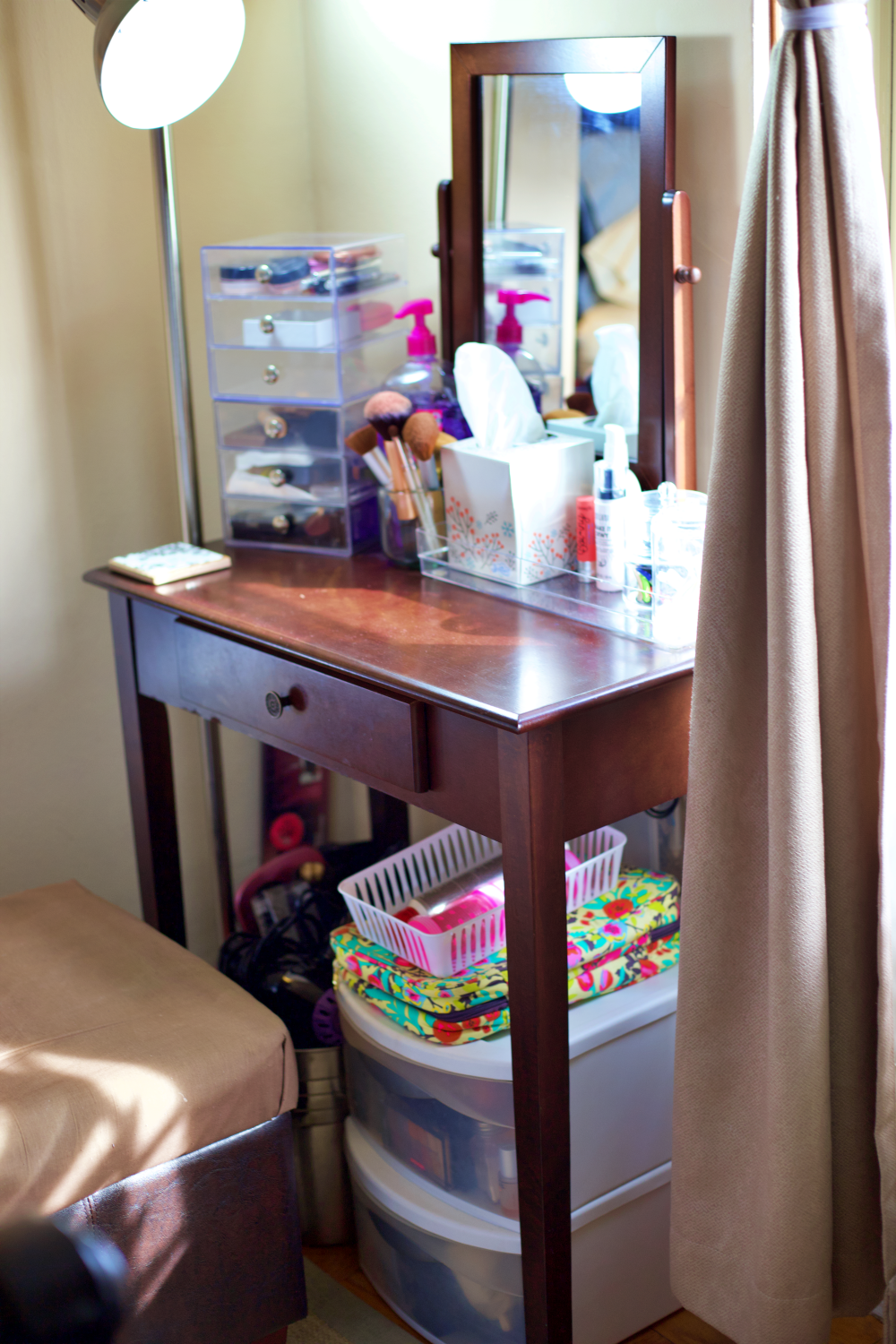 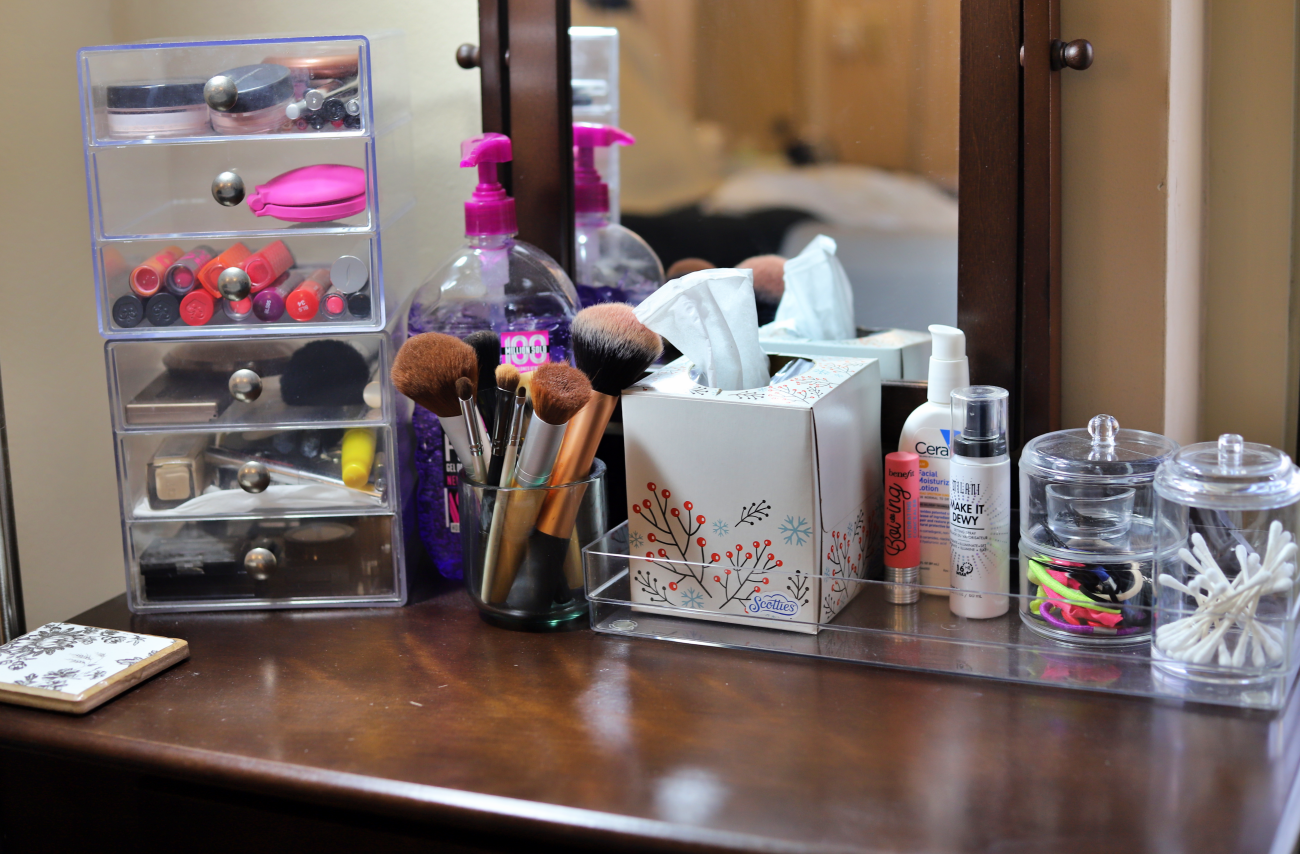 Below is a closer look at what was under the vanity. Believe it or not, it may look really unorganized but everything actually did have a place to live in. I had a few hair appliances in that large metal bin, my hair brushes and a bottle of wipes were off to the left of that and I also had two drawer organizers stacked on top of each other with all my blushes, eye shadows, foundations and more hair appliances (I have way too many hair appliances). As you can see, there are a few extra items on top of the drawers as well (again, items that I hardly ever use!) 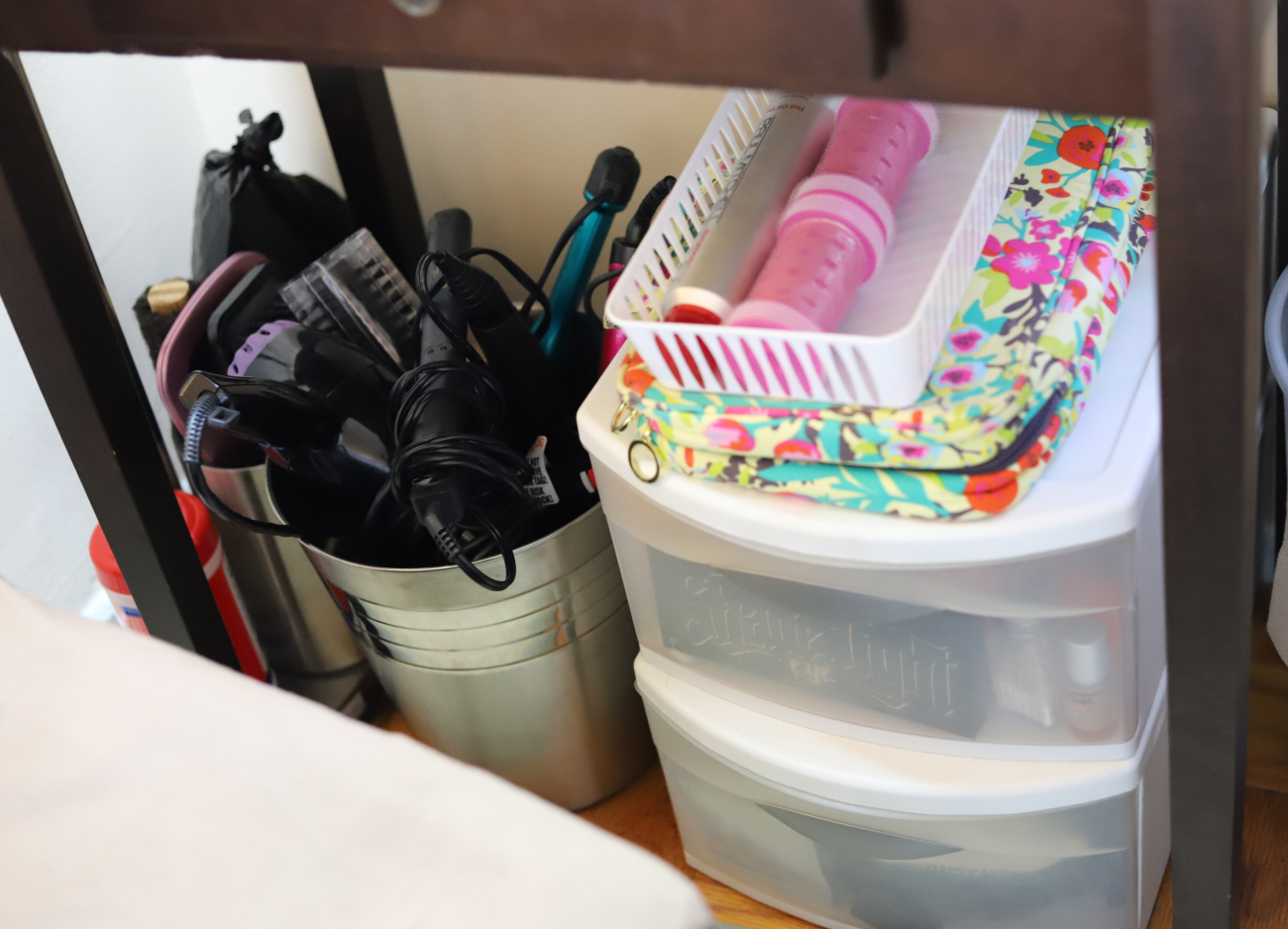 The first thing I decided to do was declutter. That opened up so much space! Some items were moved to other rooms, some were donated and everything else went into the trash.

I mainly worked with items I already had once I started organizing but I did also purchase a few random items to finish things off.

I purchased a clear decorative jar with a lid for makeup sponges from a nearby dollar store.

I also picked up a spray bottle and dusting glove to store in my vanity so that it’s easy to keep things clean. I put a DIY mixture of water, white vinegar, and essential oil in the bottle.

Next, I got a shelf grip liner (also from the dollar store) to keep things from moving around in the drawers.

Then I found a small white container at the container store that I’m using on top of the vanity to keep all the makeup I use on a daily basis. This makes getting ready in the morning so easy! 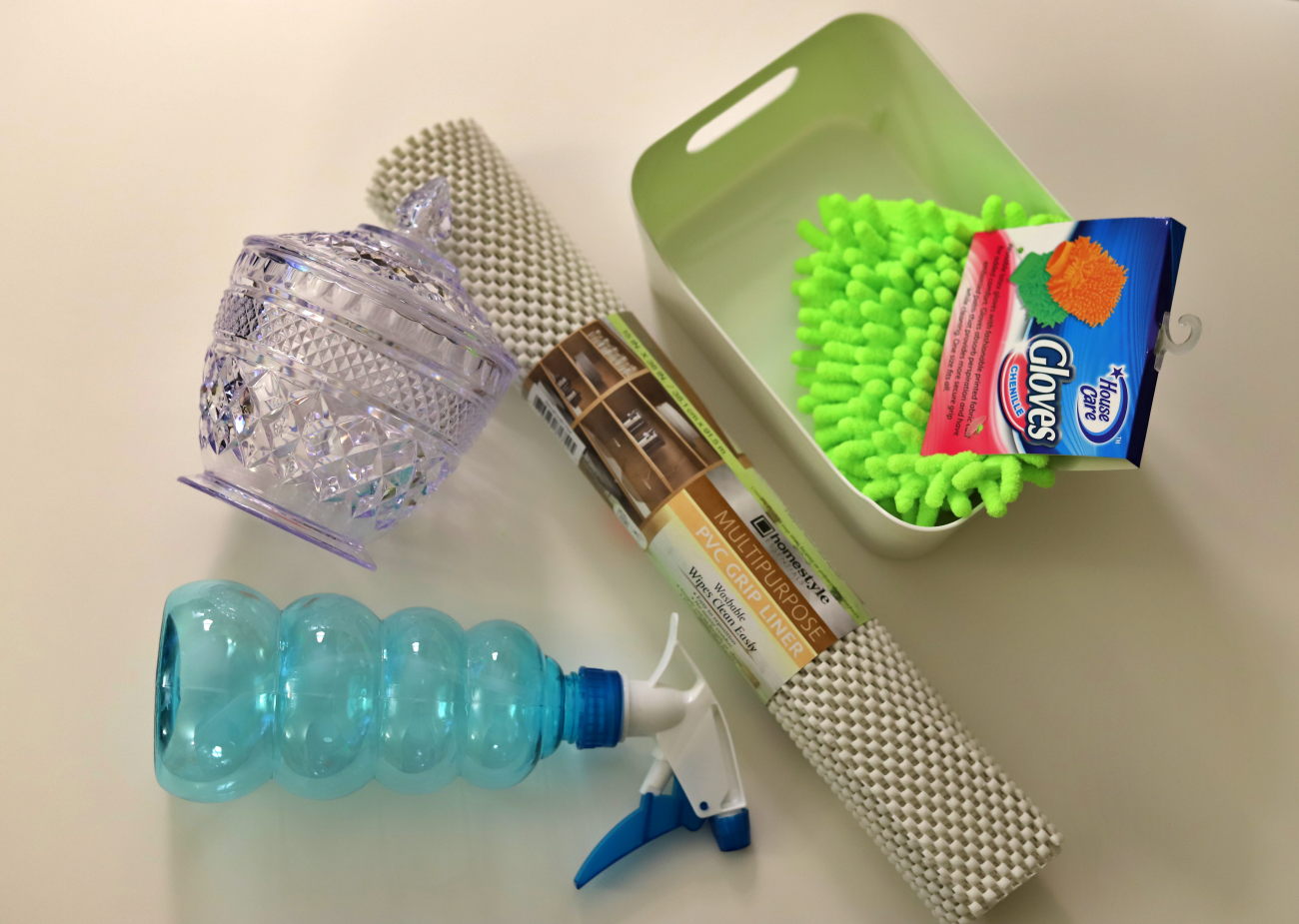 I also purchased a pretty artificial flower stem from the dollar store to use with a thin long vase I already had at home. Because why not make it look both organized and pretty! 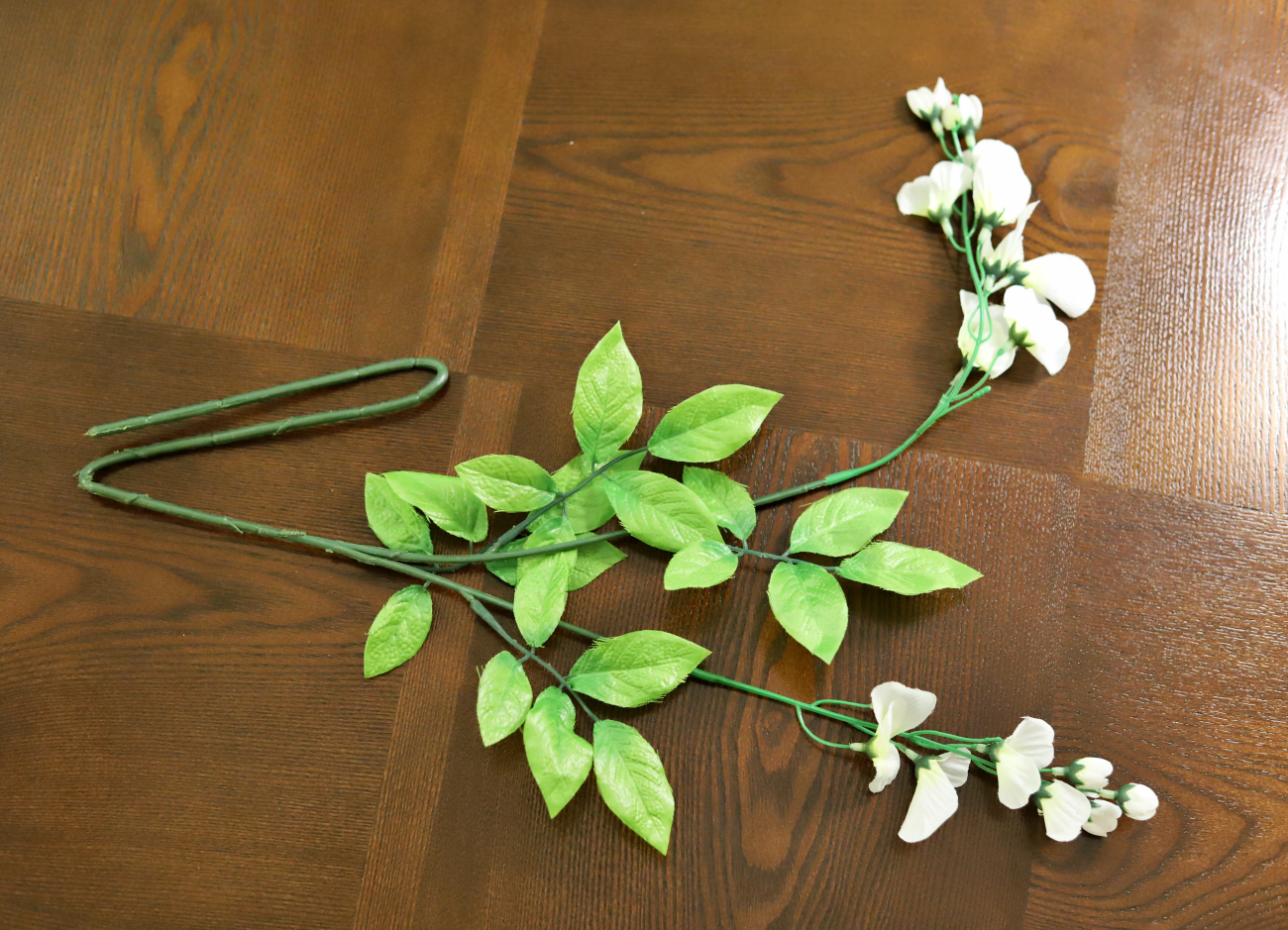 There’s also a few before photos of how the drawers looked inside but I added those below with the after photos so that it’s easy to compare.

Here is how everything turned out after organizing: 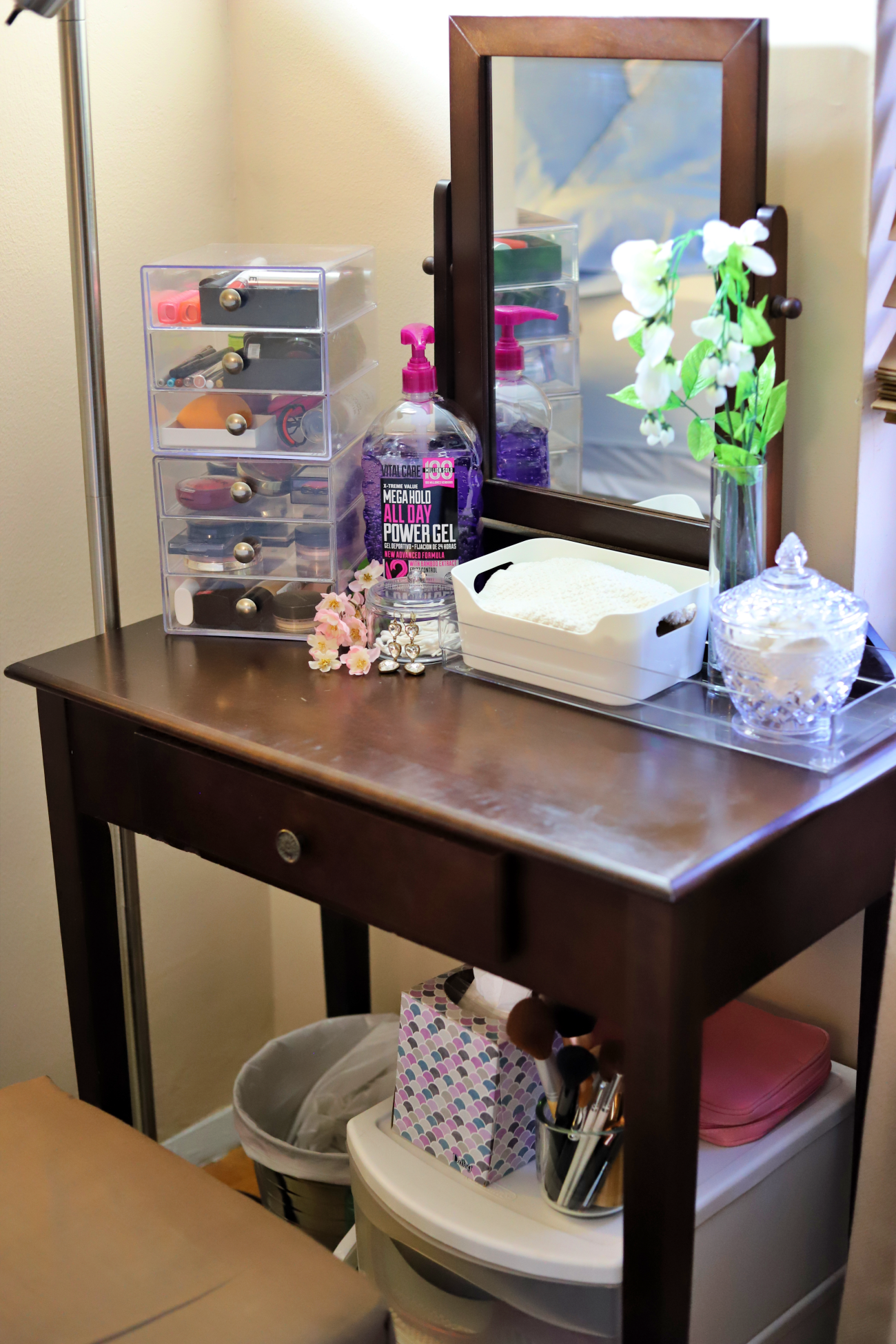 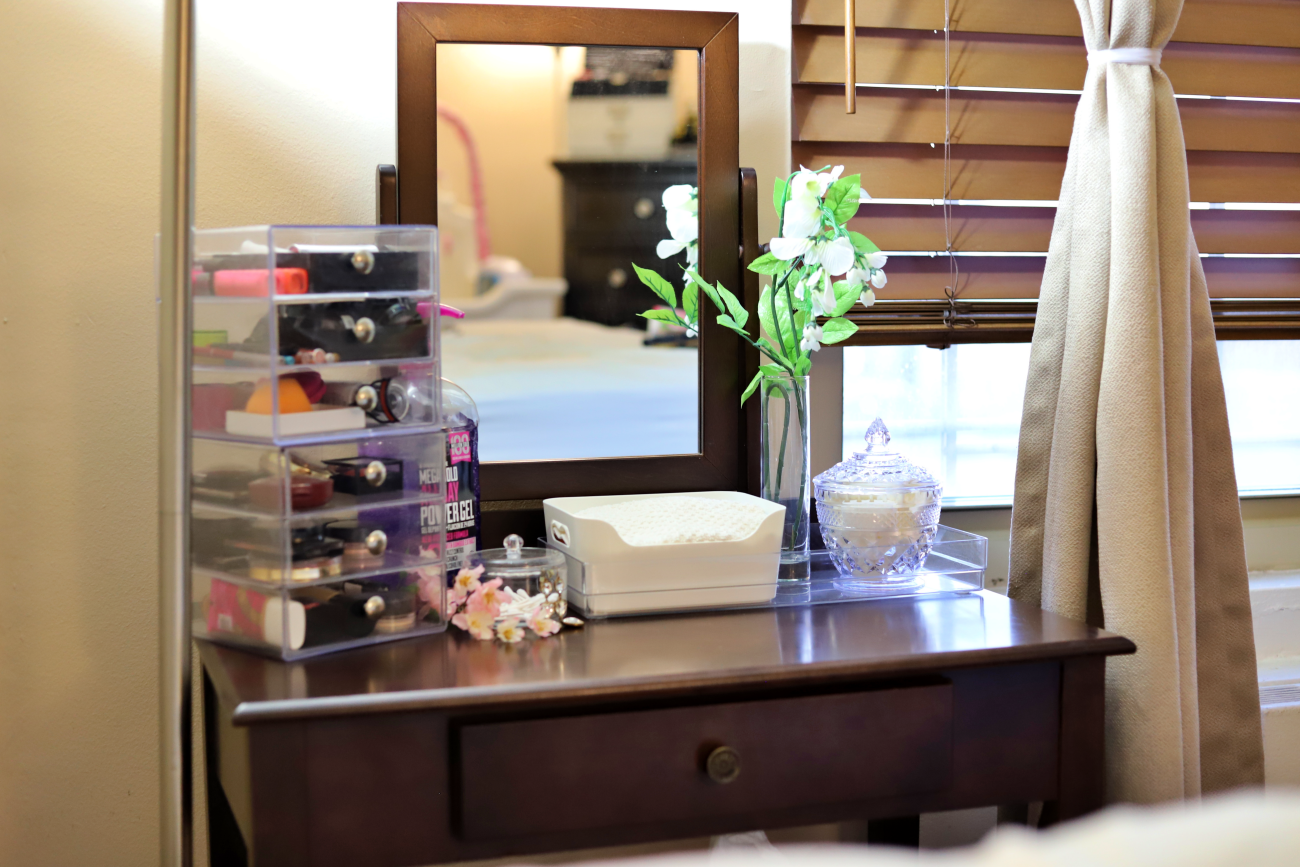 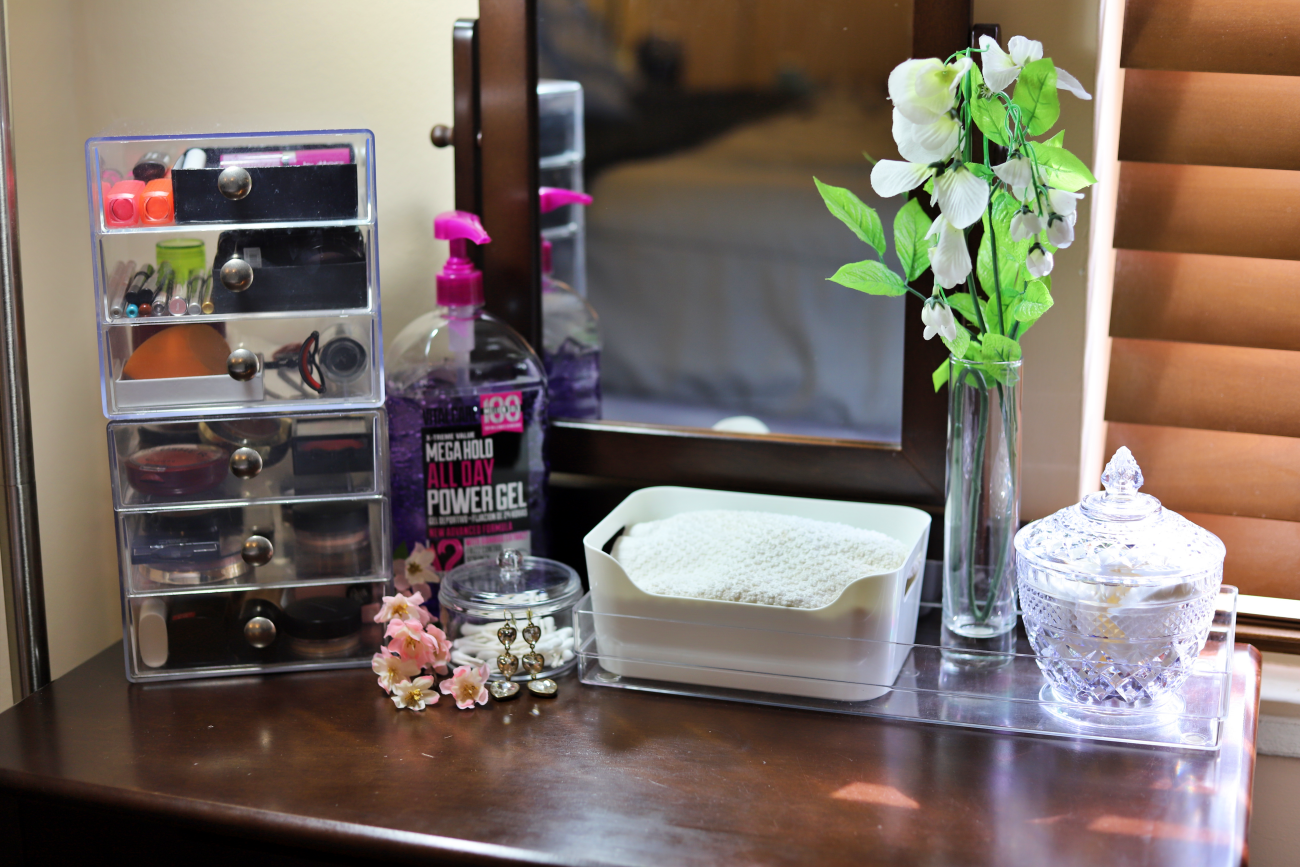 I kept decor simple. I used old earrings I never wear anymore to add a little interest to one of the clear containers on the vanity. Then I tucked those pretty pink artificial flowers in between the container and acrylic drawers that are still holding my makeup.

Then I placed the flowers I bought in a clear, skinny vase. 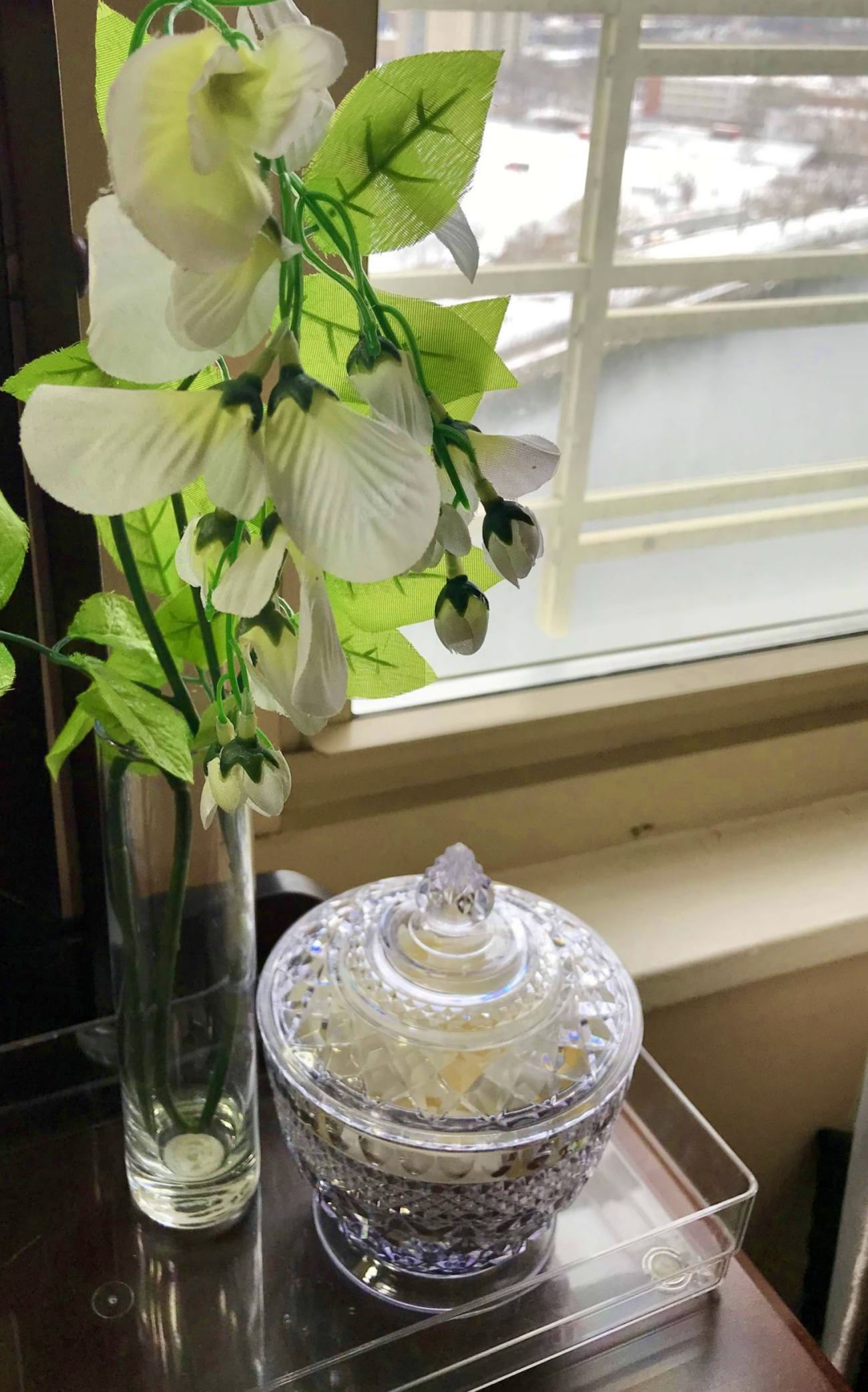 It may not be noticeable from the picture but the decorative jar from the dollar store catches the light from the window perfectly! It’s probably my favorite part of everything done to the vanity. And it was only $2! Woohoo!

As for under the vanity, I placed my brushes, a box of tissues, and more brushes in that pink bag behind the box of tissues right on top of the white stacked drawers. Next to the drawers is the spray bottle with the DIY all-purpose cleaner. 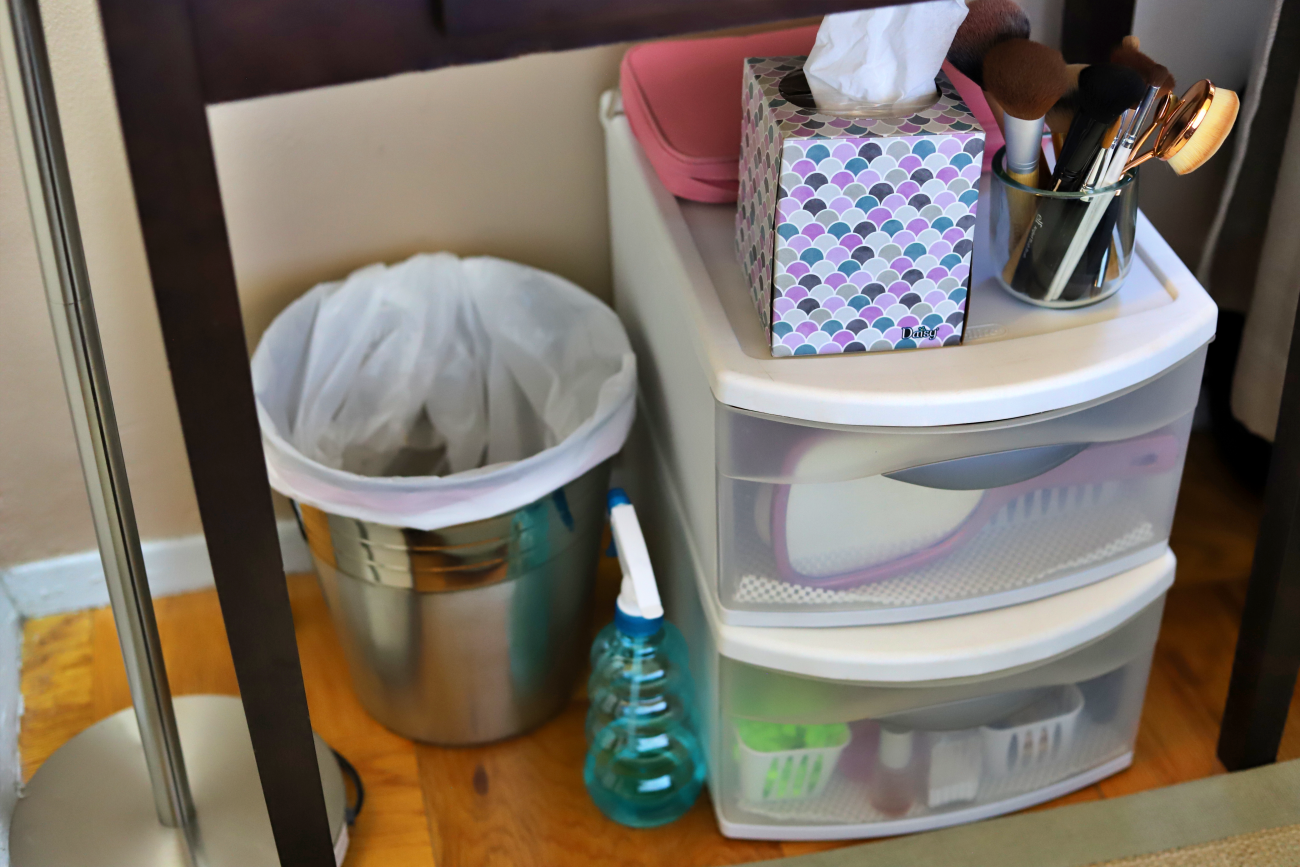 I decided to move all my hair accessories into the small vanity drawer. I also lined the bottom of the drawer with white printer paper. 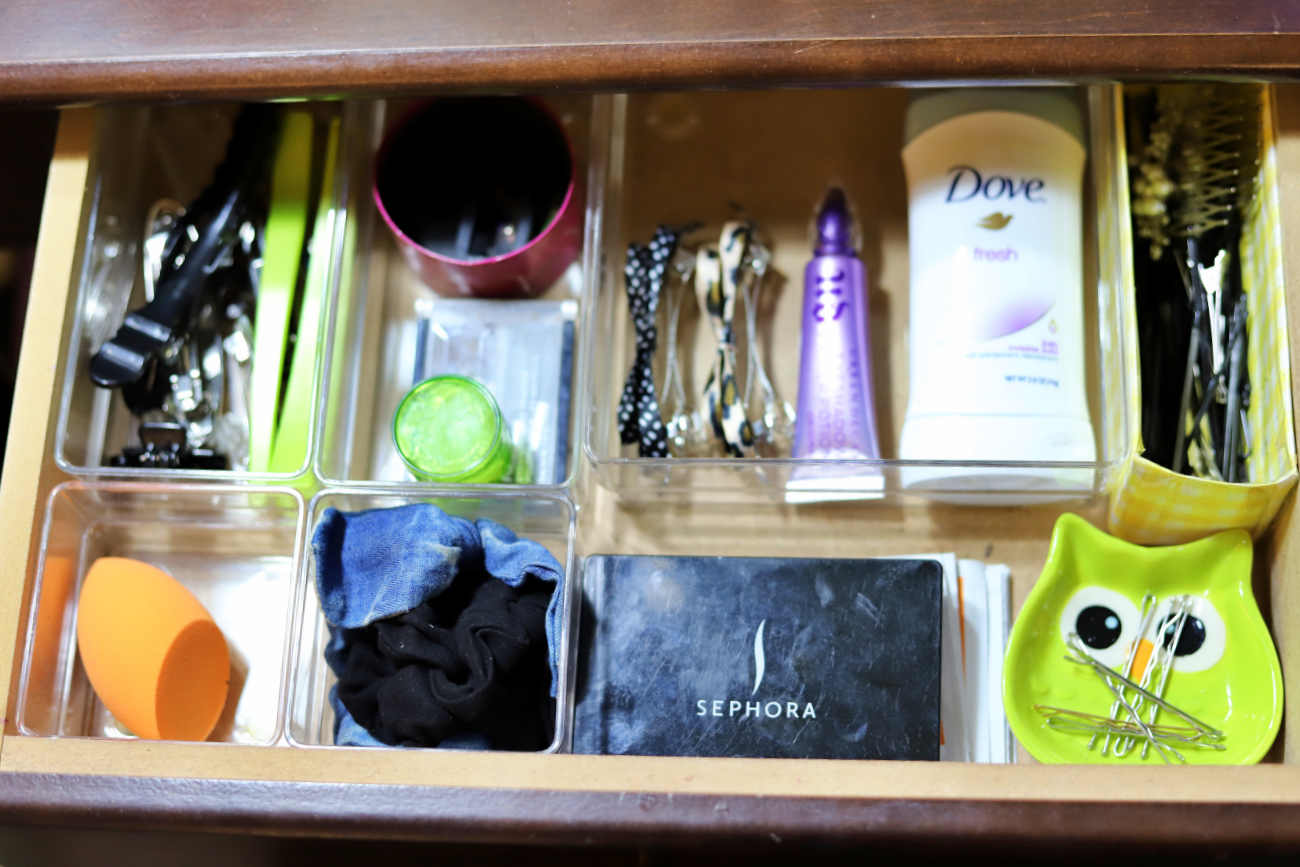 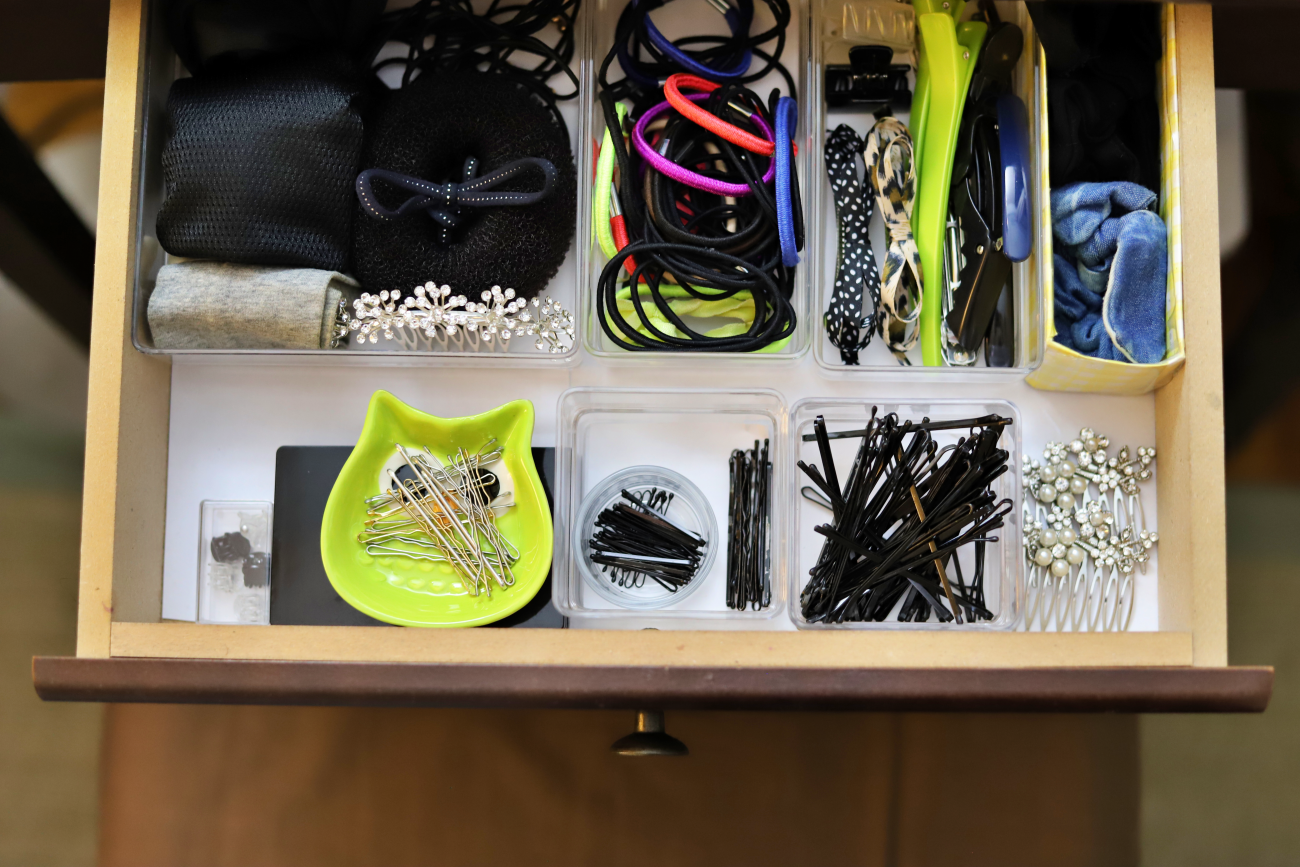 The vanity drawer has a few of these small containers that I purchase from the container store a few years ago. 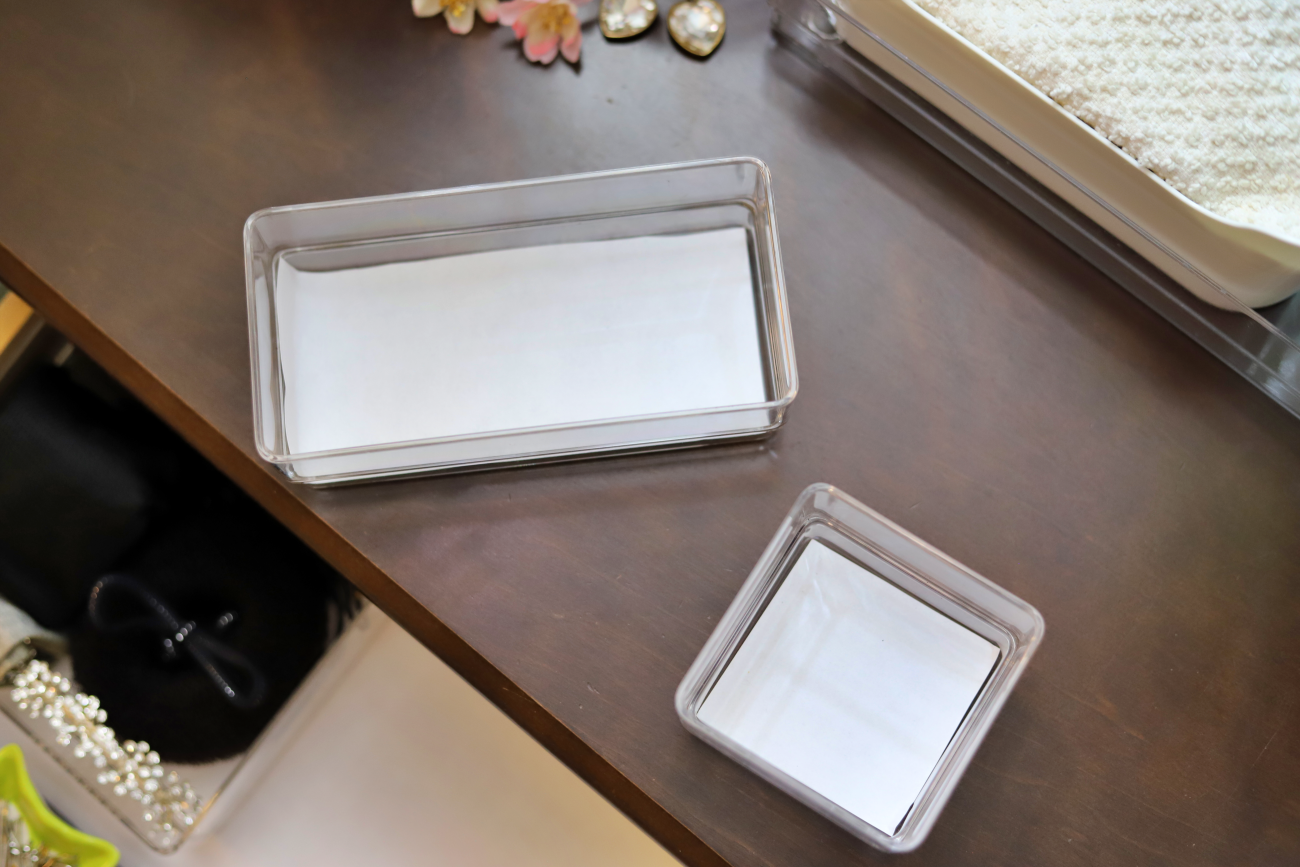 Here’s what I did with the plastic bin under the vanity:

I placed all my eyeshadow palettes, wipes, a large mirror, my coaster (for when I have a drink with me at the vanity) and hair extensions from back when I got married in the top drawer. I also lined the top and bottom drawer with the grip liner from the dollar store. 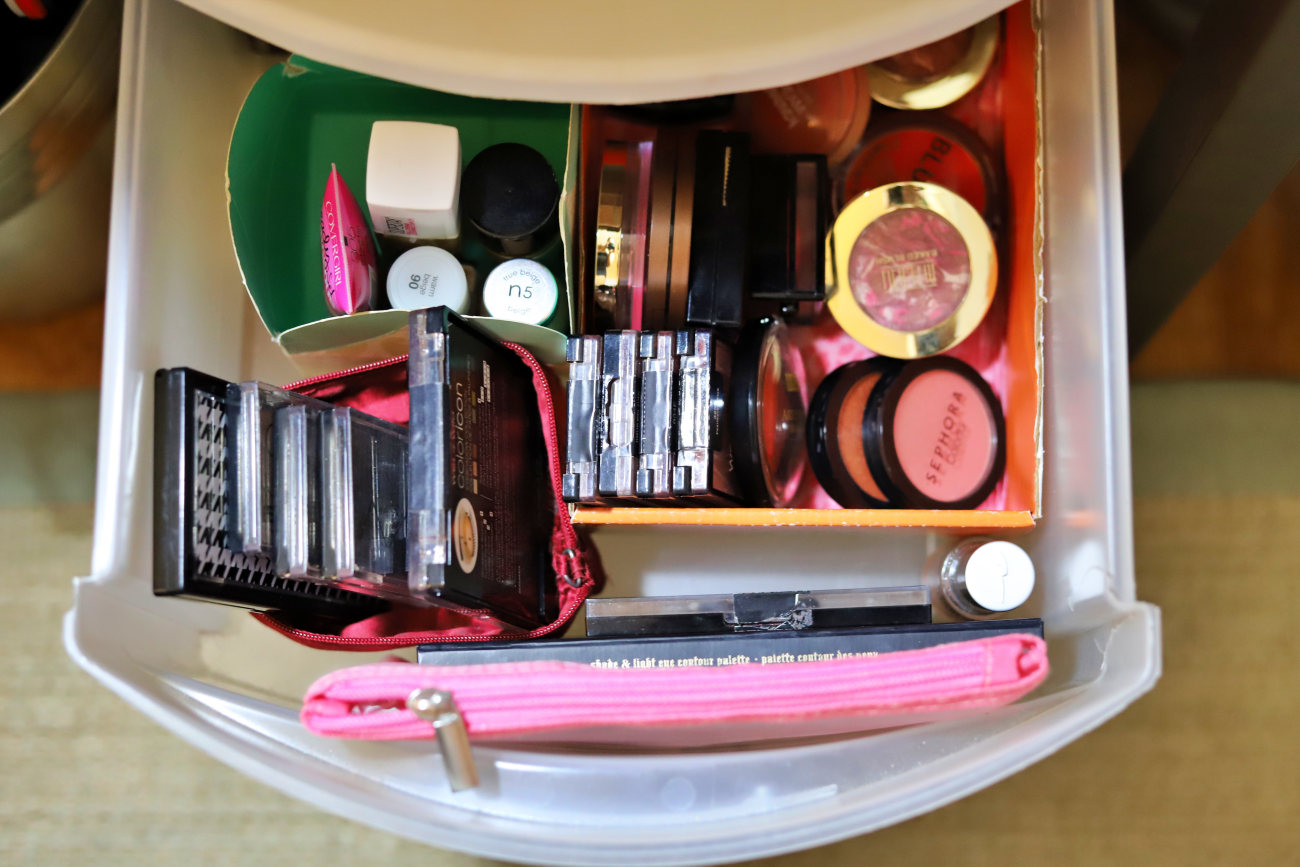 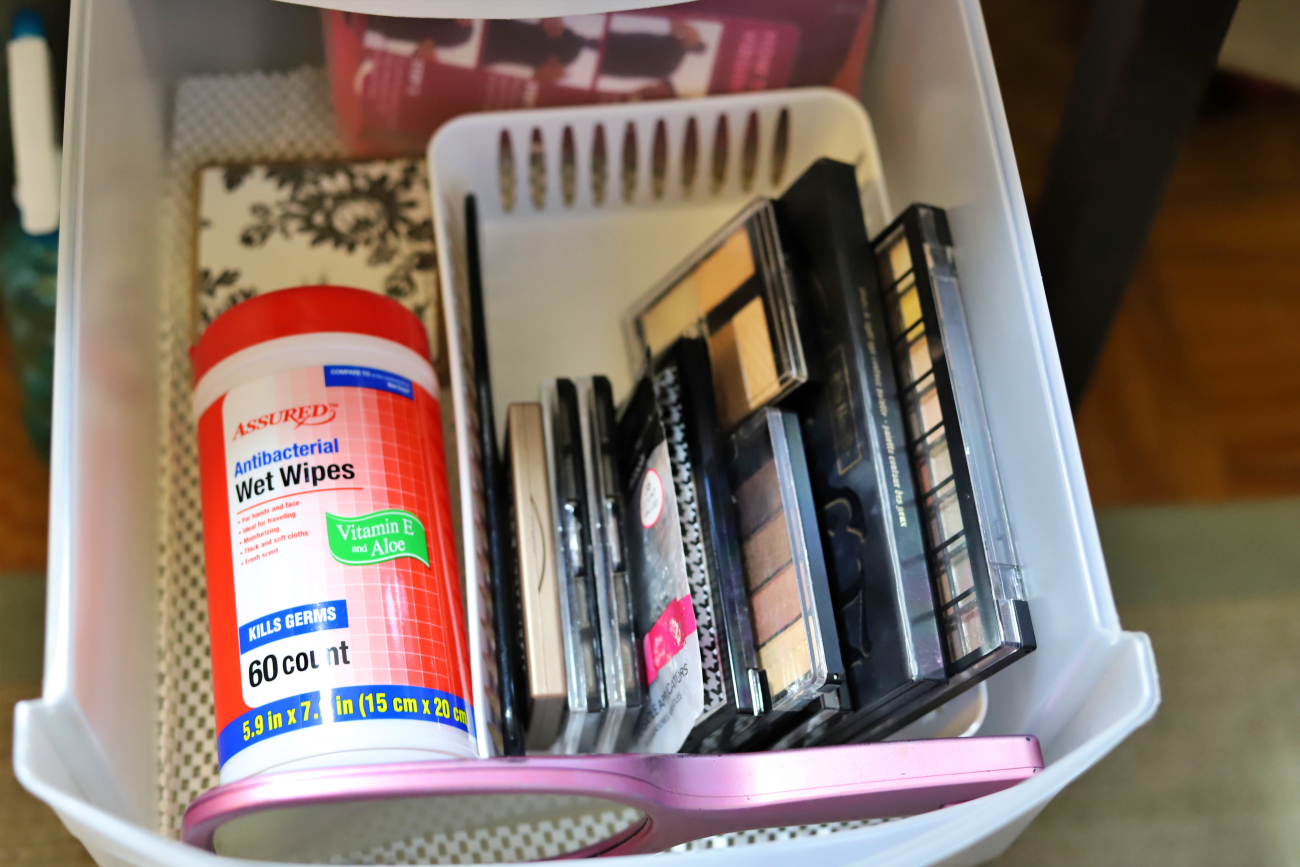 The second drawer has my hair brushes, heat protectant spray, a few rollers, the dusting glove I purchased from the dollar store and a couple of other items. 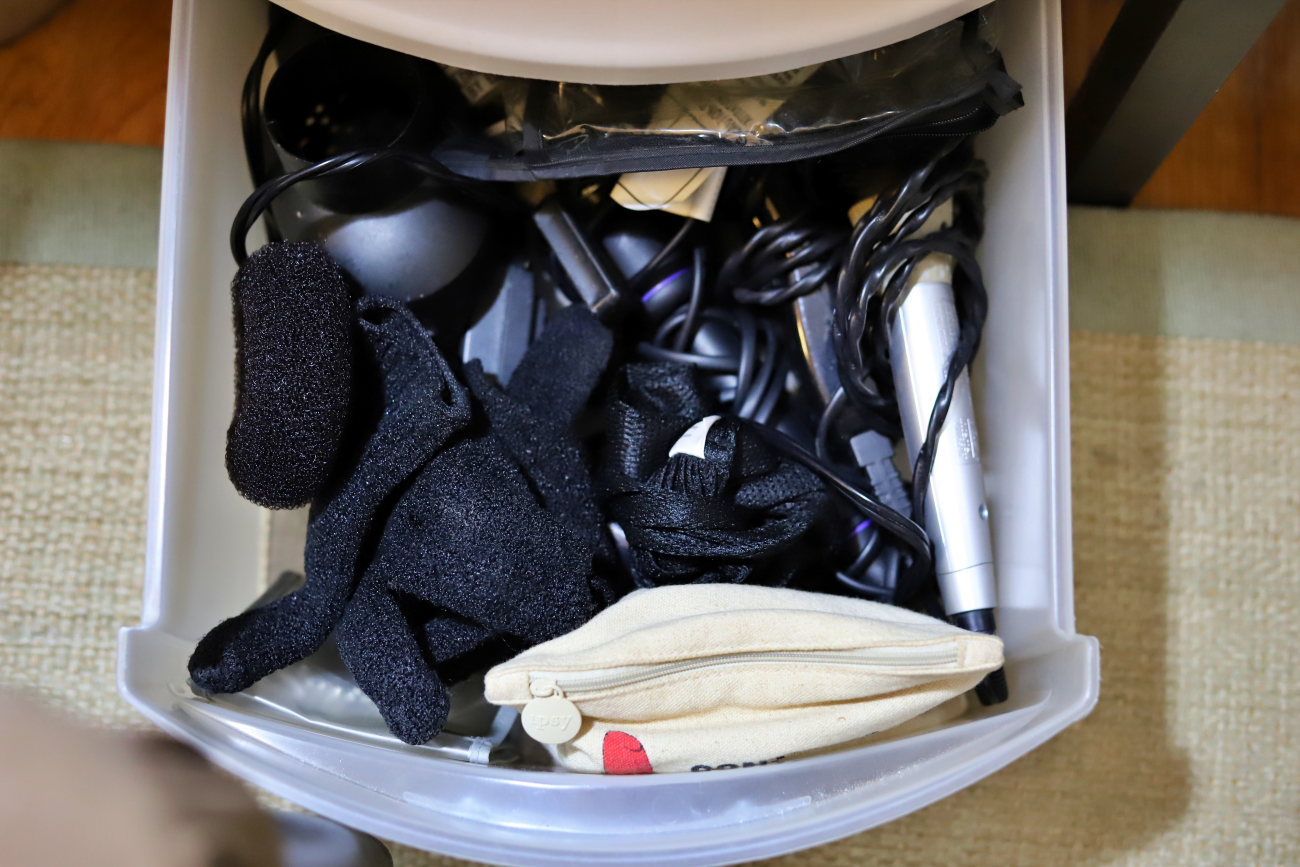 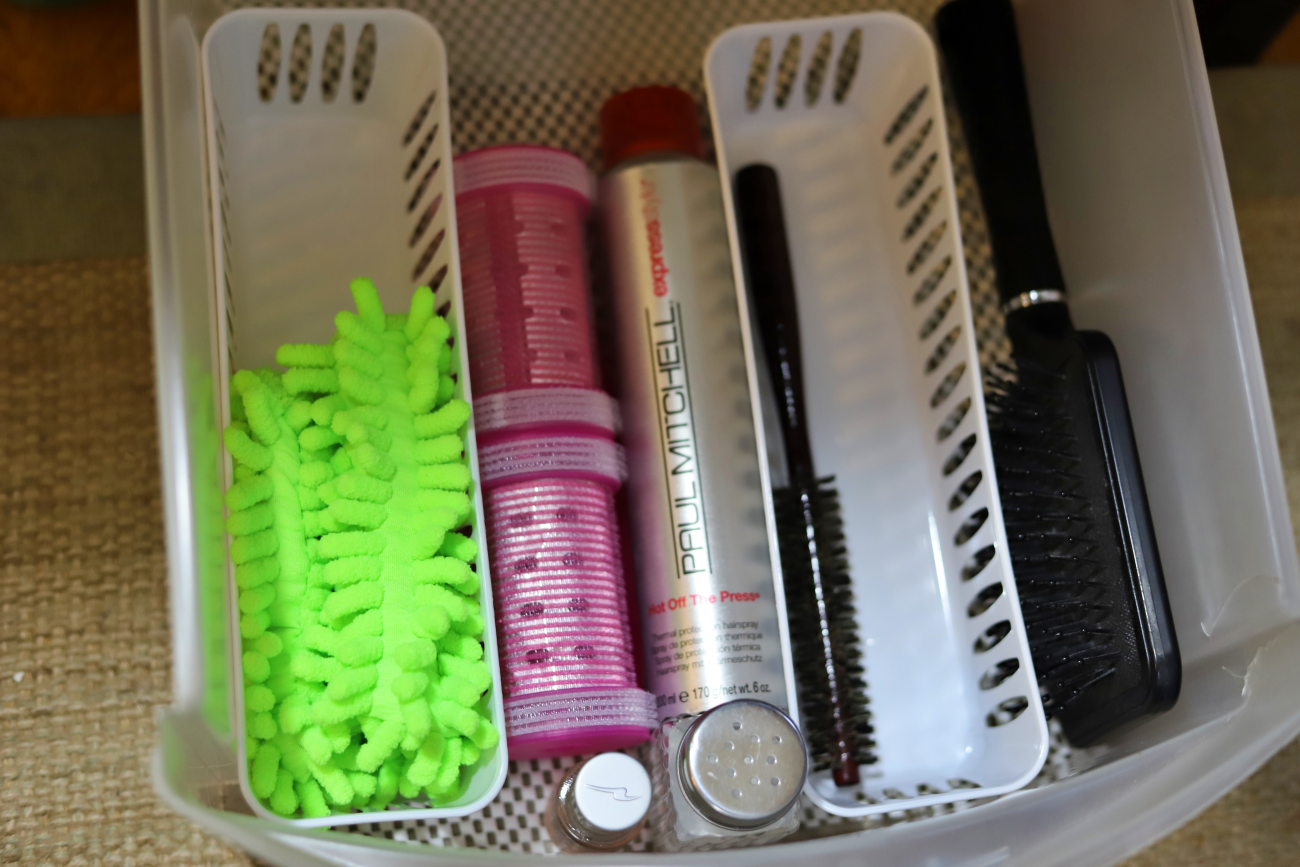 I have a small storage ottoman that I use for seating while I’m doing my makeup. Luckily I was able to clear up a lot of space in the ottoman after decluttering and that made some space for all my hair appliances. 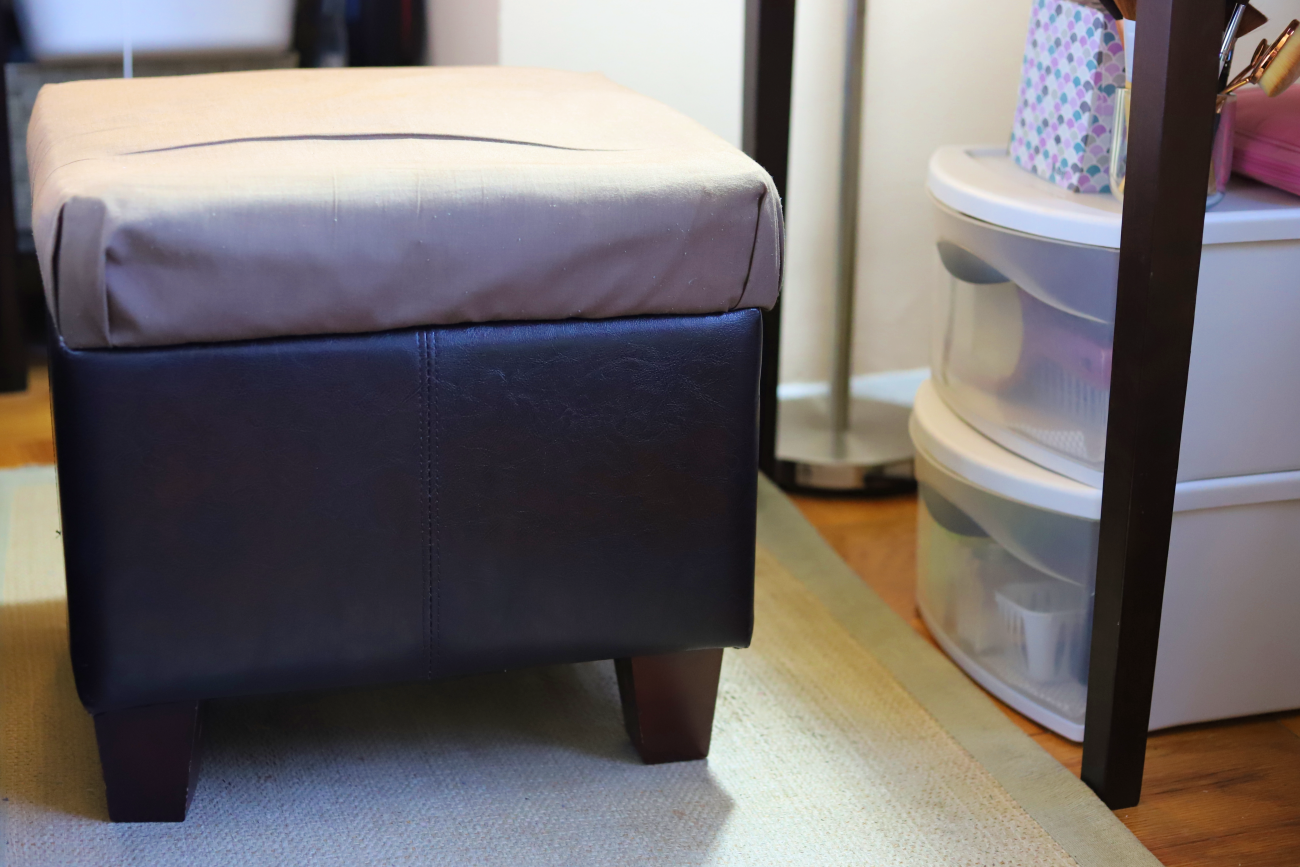 I hope this inspired you to go and organize an area in your home too! With a little patience, some ruthless decluttering and mostly making use of items you already have at home you can get around to organizing anything you’ve been wanting to tackle!

28 Shares
Pin28
Share
Tweet
How To Clean Your Coffee Maker – So Your Coffee Starts Tasting Better Again! How to Create a Unique Spring Centerpiece

A Simple and Cheap Way to Organize Your Wrapping Paper 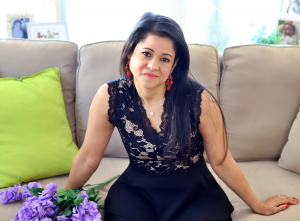